African Lawyers: Between Imperial Legacies and Transformation in Global Capitalism

Dr. Sara Dezalay, Senior Lecturer at the Cardiff School of Law and Politics and Visiting Fellow at King’s College London. Her work focuses on the roles played by lawyers in distribution conflicts over natural resources between the Global North and the African South.

Africa is the "global economy's last frontier"! Images of the African continent as a boon of minerals riches, and new legal Far West pervade media and scholarly accounts. Yet, these images tend to reflect the protracted political and development dependency of African states, with lawyers involved in corporate dealings on the continent either denounced as mercenaries at the service of neo-colonial "looting" or idealized as missionaries of the rule of law.

This presentation suggests a research strategy that moves away from these ideological and political accounts. Informed by political sociology and global history, it uses lawyers' trajectories and professional strategies as an entry-point to trace the "interconnectedess" between European colonialism on the continent and the consolidation of the contemporary international economic and legal political order. It illustrates this approach with a case study of the "Africa" Bar in Paris as a key site in which extractive deals between multinational corporations and Francophone African states are negotiated. This micro-focus underscores the dual position of Paris as both "offshore" yet deeply connected as it is shaped by both imperial legacies and the ongoing US-led wave of corporate legal globalization into the African continent.

This approach seeks to build a more nuanced explanation of Africa's unequal and uneven relationship with the global economy as one shaped by the path of imperial legacies and successive and interconnected waves of globalization. The presentation concludes with the potential paths opened by this research strategy to assess the concurrent boom and backlash against the international investment regime. 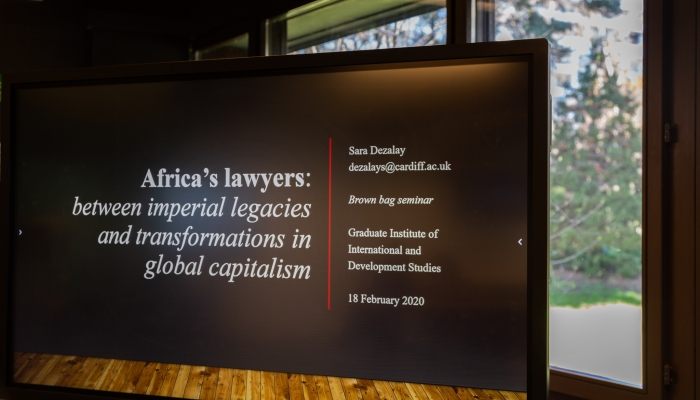